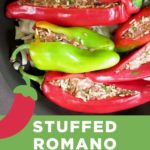 Ruth’s stuffed Romano peppers recipe from the Jerusalem Cookbook is Yotam Ottolenghi’s mother’s recipe. I first made this treasured dish in August 2013 shortly after we started our Tasting Jerusalem group and have put it on repeat since. (This post was first published in 2013, updated July 2019). 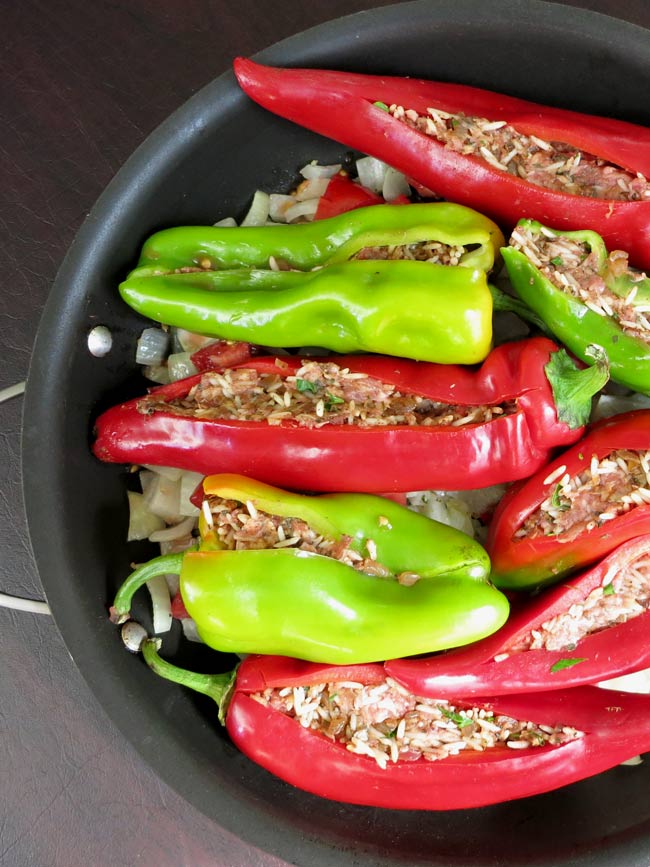 Growing up, I thought the only peppers that existed in the world were green bell peppers. Romanos? Padrons? Serranos? Anaheims? These peppers didn’t exist in my food world. My mom frequently served green pepper steak and we gobbled it up. The steak was great – not so sure about the peppers.

Fast forward to my adult realization that peppers sometimes aren’t green and come in a myriad of shapes, sizes, colors, and flavors. Having moved up the pepper learning curve, I decided to prepare the stuffed peppers from the cookbook Jerusalem by Yotam Ottolenghi and Sami Tamimi. It was the first time I ever stuffed a pepper. Please don’t think less of me for it. At least I finally took the plunge. And what a lovely, fragrant, hearty, soul-satisfying plunge it was! 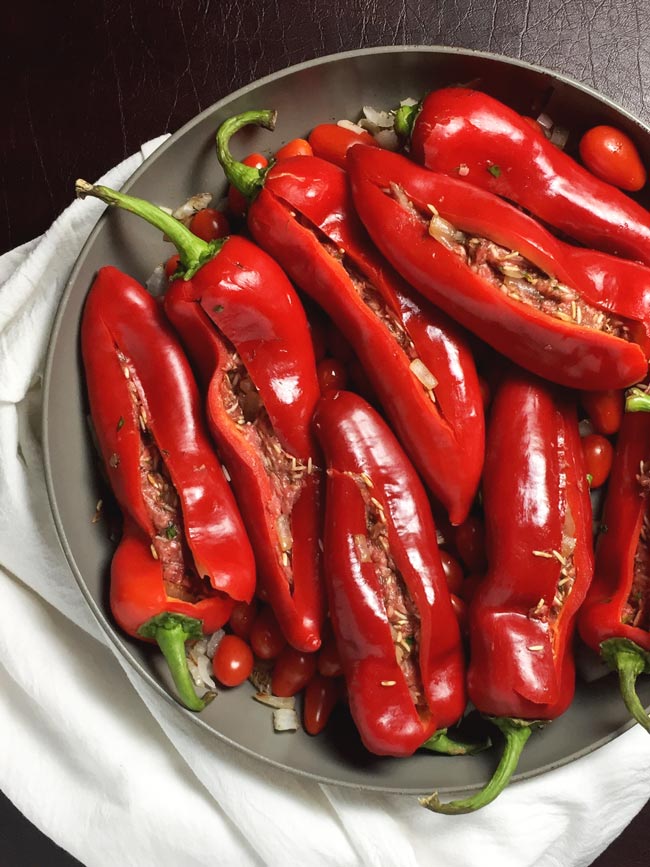 The recipe is named after Mr. Ottolenghi’s mom, Ruth. Now that I’ve eaten her stuffed peppers, I want to meet her, cook with her, and share a meal with her.

What are Romano Peppers?

The Romano peppers are part of the sweet pepper family that includes bell peppers of all colors. But Romanos are longer, thinner and, to me, have the flavor of hot peppers without the searing heat. 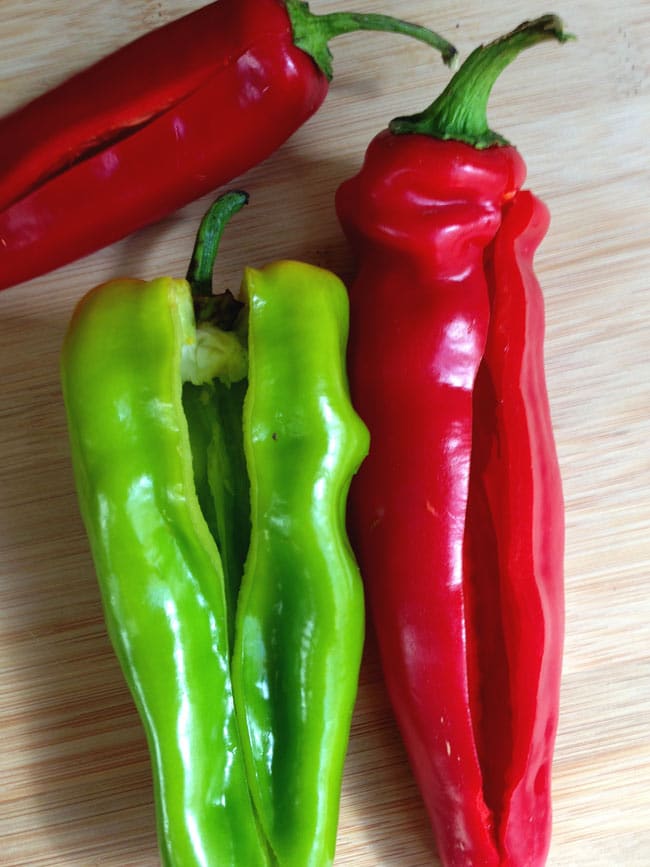 Where Can I Buy Romano Style Peppers?

You should be able to find Romano peppers or a substitute for them in your local large chain grocer or small local grocers such as Middle Eastern, Indian, or Mexican stores.

What Can I Substitute for Romano Peppers?

Anaheims or Poblanos should be a perfect substitute for Romanos. But the red of the Romano is stunning if you find them. Or try a combination of Anaheim and Romano – combining the red and green is visually appealing and the flavors work very well together.

What is Baharat Spice Mix?

In Ruth’s recipe, these skinny beauties are stuffed with a basmati rice and lamb mixture flavored with Baharat spice mix, cardamom, dried mint, fresh dill and parsley as well as sautéed onion that is mixed with the dry spices. Baharat (pronounced ba-har-ot) means “spices” in Arabic – and that’s exactly what it is: a versatile mix of warm spices used commonly in Arabic cuisine. The Baharat mix I used contains nutmeg, black pepper, coriander seed, cumin seed, cloves, cinnamon, cardamom, paprika, and chili. You can read more about this warm and fragrant Middle Eastern spice in this Tasting Jerusalem post. 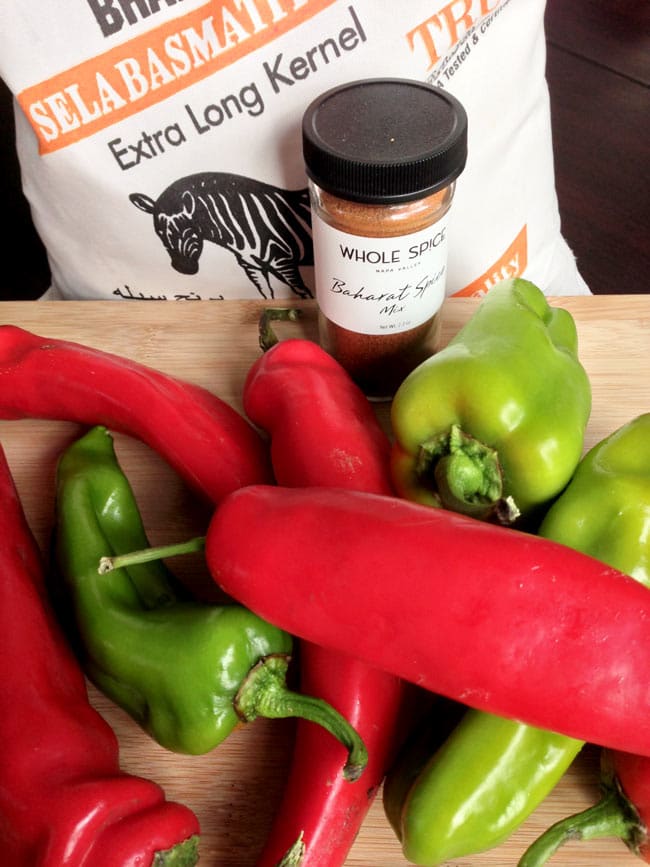 You can also mix your own Baharat or find it at a local Middle Eastern market or purchase it online from your favorite spice vendor (suggestions below). If you want to make this Romano peppers recipe and don’t have the Baharat, just combine as many of the Baharat spices as you have on hand and let your nose guide you. If you like the way it smells, it will taste great in the stuffing mixture.

How to Cook Stuffed Peppers

Break down the process into stages 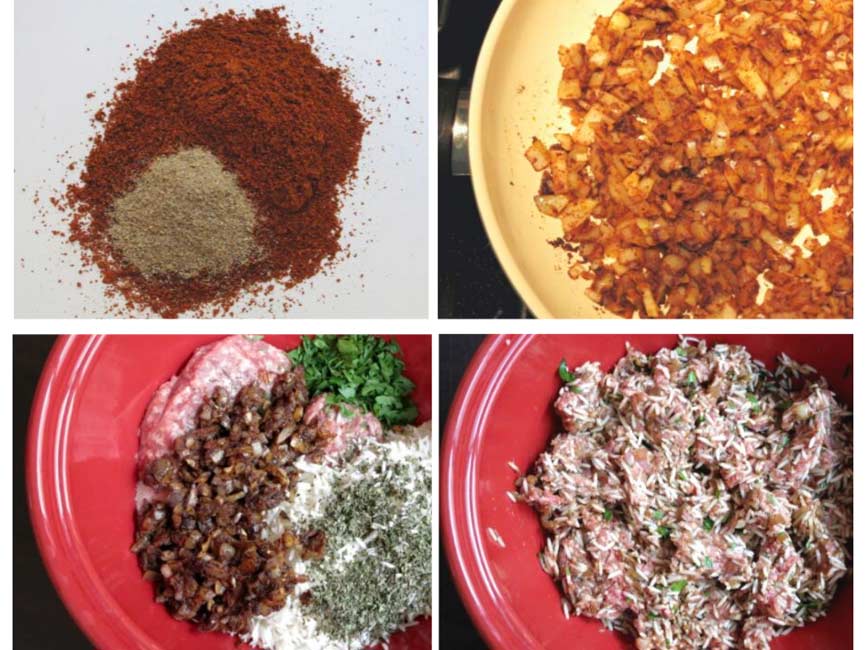 Adapt the recipe to your ingredients on hand 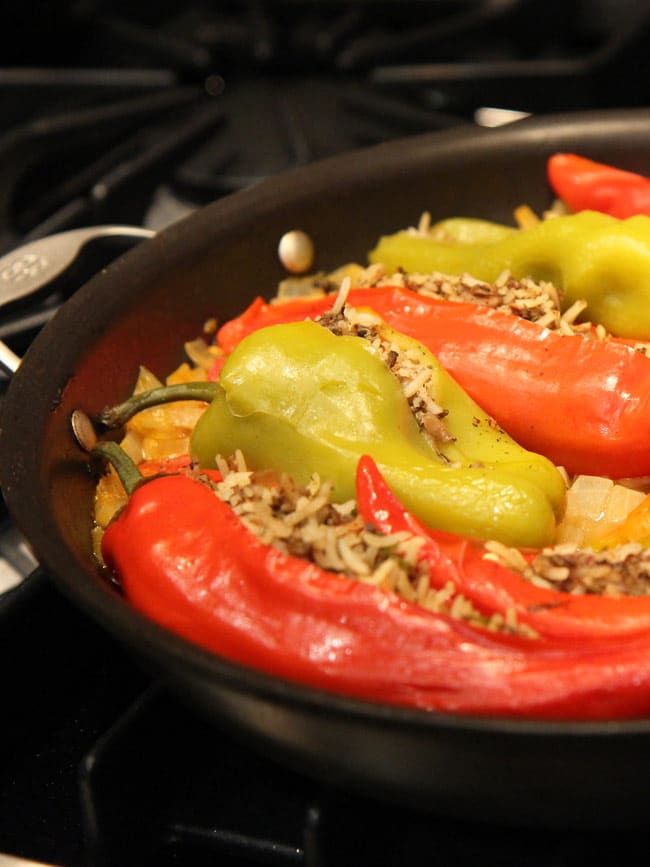 I’ve included my version of the recipe below. But I encourage you to buy the cookbook Jerusalem, and join our cooking conversation on the Tasting Jerusalem Facebook page and group where we delve deeper into Ruth’s son’s cooking wizardry and explore the fabulous flavors of the Eastern Mediterranean.

What Should you Serve with this Stuffed Romano Peppers Recipe? 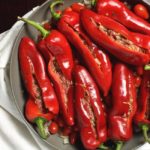 This stuffed Romano peppers recipe from the Jerusalem Cookbook is a gem from Yotam Ottolenghi’s mom, Ruth. It was my foray into stuffed peppers and hope it will be yours too!

Notes
• If you don’t have fresh dill, dry will work. I tried it.
• If you don’t have dried mint, omit it or try a touch of fresh.
• I haven’t tried it without the sugar, but I bet you could omit it and the filling would be fine.
• If you don’t have Baharat spice mix, buy some or make some, it’s so good. BUT, you can use as many of these as you have around for the stuffing to approximate the flavor: nutmeg, black pepper, coriander seed, cumin seed, cloves, cinnamon, cardamom, paprika, and chili. And you can flavor the meat to your liking – the basic recipe will still work.
• Can’t find Romano peppers? Substitute Anaheims or any elongated sweet, mild pepper or mix the two as I did the first time I made this recipe. Makes for a beautiful presentation. 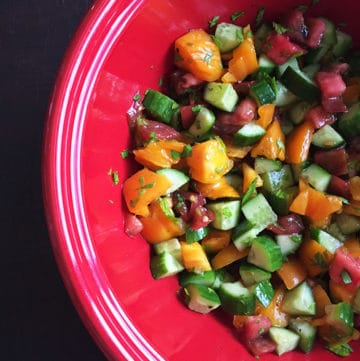