Today is #PieDay in the blogosphere/twittersphere, and though I have conquered most of my phobia around pie crust, and would jump onto this crusty adventure in a heartbeat, alas my summer schedule so far favors preparing quick crisps.

Yes, we do eat crisps for breakfast with yogurt – yum!

Fresh fruit pie filling and crisp filling really are one in the same. So the real difference lies in working the dough for the crust. Which I’ve discovered is not as scary as it might seem but it takes more time than preparing the crisp topping in bulk, and tossing it over the top of the cut up fruit. So as I’ve mentioned more often than I should in this blog, my hectic schedule dictates what I cook and crisps fill that frantically-paced slot perfectly. But if you are inspired by all these #PieDay and #PieParty2012 posts, check out my Pie Dough for Dummies and my Blueberry Pie to Warm up your Winter posts and start baking! Then come back and tell me what you’ve created please!

In the meantime, let’s talk crisp topping. One of the brands that supported the BlogHerFood conference in Seattle was WholeSome Sweeteners and in their gift bag, they gave us some Coconut Pa

lm Sugar which has a low glycemic index (a good thing) and can be substituted one-for-one for brown sugar. After surviving the graduation, conference, graduation scenario, I was too tired to cook, but I wanted to mark the beginning of summer for the kids and fresh fruit crisps do that for us. Since we eat so many, I thought testing this healthier sugar might help me lighten up the topping without losing its usual appeal. Here’s what I came up with: 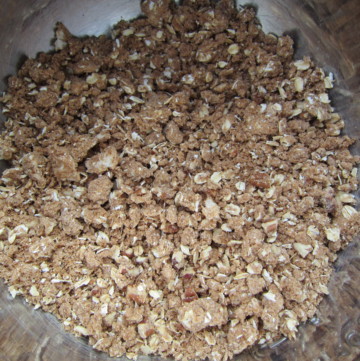 Beth Lee
After surviving the graduation, conference, graduation scenario, I was too tired to cook, but I wanted to mark the beginning of summer for the kids and fresh fruit crisps do that for us. Since we eat so many, I thought testing this healthier sugar might help me lighten up the topping without losing its usual appeal.
0 from 0 votes
Print Recipe Pin Recipe
Prep Time 5 mins
Cook Time 10 mins
Total Time 15 mins
Course Dessert
Servings 12 servings
Calories 203 kcal

NOTE: I used significantly less butter than the Deborah Madison recipe I referred to in my original crisp post. I think it worked and my kids gave the topping a thumbs up, but feel free to modify amounts in this recipe. A little more butter for a slightly richer topping. A little more or less sugar as your taste buds dictate. Perhaps a variation on flavor – more cinnamon, no cinnamon, cardamom perhaps? Variation is the beauty of a crisp, both in the topping and filling. This post is focusing on the topping but here’s a quick bit about the filling, I use whatever fruit I have around, mixing it a bit haphazardly with some sugar – 3 or 4 tablespoons for a smallish crisp and a couple tablespoons of flour and some vanilla extract and cinnamon. Again – use your imagination with the flavors and sugar amounts. You can’t really go too far wrong. While rhubarb is still around, try a strawberry rhubarb crisp – that was what my daughter and her friends requested last week and not a bite remained in the pan that evening. And for a small pie size crisp, you'll need about 1 cup of topping. For a larger 9 x 12 pan, probably about  1 1/2 cups to 2 cups of topping.

What’s your favorite quick summer dessert or the one dessert that makes it feel like summer to you?

(P.S. In case you are wondering, I am not being paid by Wholesome Sweeteners – though I would be ok with that :-). I wrote this post and created this crisp topping because I wanted to and that’s all there is to it! In addition, I appreciated all the brands that came to BlogHerFood to support the conference and meet bloggers so a shout out to them all for that effort and support.)