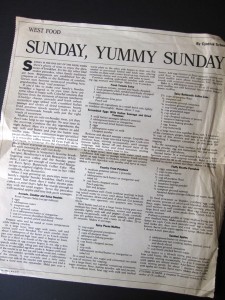 I interrupt my regularly scheduled food posts to talk about cleaning out my recipe files. Don’t click away – it’s more entertaining than you think. No, this will not be a top ten list of why you should de-clutter your desk or the best way to organize your electronic and printed recipes in a snap. What it will be is a brief walk down Silicon Valley memory lane through the lens of an article written in 1986 discovered on the back side of a 26-year-old article on breakfast recipes.

As I rifled through my files of handwritten and torn-out recipes, I tried to stick to the task-at-hand – sorting the clippings by category or tossing them in the recycle bin. But occasionally I allowed myself to turn the sheet over and by chance I found a 26-year-old gem of an article.

The page was torn out of the January 12, 1986 issue of WEST magazine – the Sunday supplement to my local paper – the San Jose Mercury News. It was entitled: Sunday, Yummy Sunday (really – this is a true story). It was written by Cynthia Scheer and included several intriguing breakfast recipes such as Fluffy Ricotta Pancakes and Avocado, Cheddar, and Salsa Omelets. It had grown dog-eared and yellow, not from overuse, but from old age. 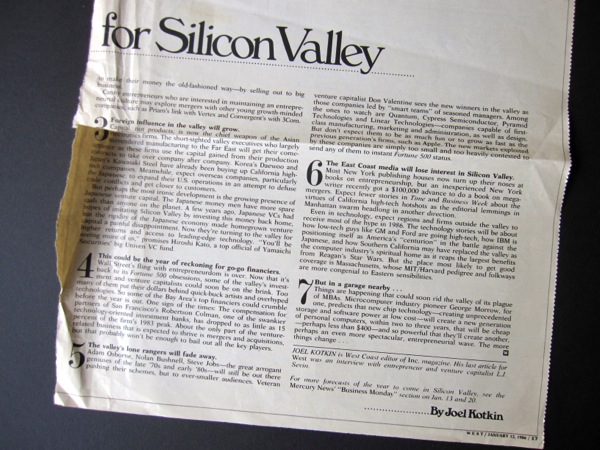 The “b-side” was an article written by Joel Kotkin, who is now a Distinguished Presidential Fellow in Urban Futures at Chapman University in Orange, California and a well know demographer, authority on trends, and frequent contributor to Inc. Magazine. His article, as near as I can tell from the half page I kept, was about predictions for the future of Silicon Valley, starting in 1986. I found #5 and #7 to be the most entertaining:

“5. The valley’s lone rangers will fade away. Adam Osborne, Nolan Bushnell, Steve Jobs – the great arrogant geniuses of the late ‘70s and early ‘80s – will still be out there pushing their schemes, but to ever-smaller audiences.” He goes on to say that “smart teams” of seasoned managers such as the team at Quantum, Cypress Semiconductor, and Pyramid Technologies would be the plodding, predictable successes the valley would now consider the standard.

Well, if at first you don’t succeed, guess, guess again… 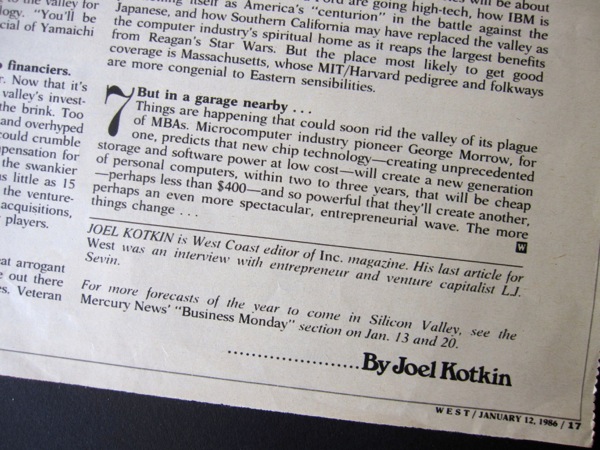 #7:  “But in a garage nearby… Things are happening that could soon rid the valley of its plague of MBAs. Microcomputer industry pioneer George Morrow, for one, predicts that new chip technology – creating unprecedented storage and software power at low cost – will create a new generation of personal computers, within two to three years, that will be cheap – perhaps less than $400 – and so powerful that they’ll create another, perhaps an even more spectacular, entrepreneurial wave. The more things change…”

He was on the right track here – though the $400 price tag was not possible until just recently when tablets became mainstream thanks to the “fading lone ranger” Steve Jobs.

I hope you’ve enjoyed this edition of The Recipe Files.

What treasures have you found in your old recipe files? And your answer can be about anything INCLUDING food. 🙂

Previous Post: « Blogs, Boeuf Bourguignon, and a Birthday: A Tribute to Julia Child
Next Post: French Fridays with Dorie: Spice-poached Apples and Pears »